James Kennedy is the President of ThREEM3. ThREEM3 has rights to develop rare earth and non-ferrous resources.

In addition to his position as president of ThREEM3, Mr. Kennedy is an independent consultant to the financial, mining and nuclear energy industry and works directly with the Thorium Energy Alliance and others in promoting a unified rare earth and energy policy within the United States. Mr. Kennedy has contributed to rare earth legislation in the 111th and 112th Congress and has worked directly with the White House Office of Science Technology Policy. Mr. Kennedy is a leading advocate for the development of a fully integrated rare earth value chain inside the U.S.

Mr. Kennedy is regularly invited as an expert speaker within the mining and nuclear industries regarding rare earths and Thorium Energy. Mr. Kennedy has been a speaker at the following events:

Mr. Kennedy has an MA in Political Economics and Public Policy from Washington University, St. Louis (1993). 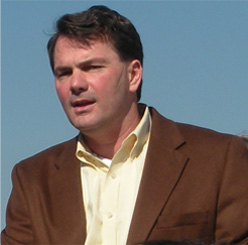